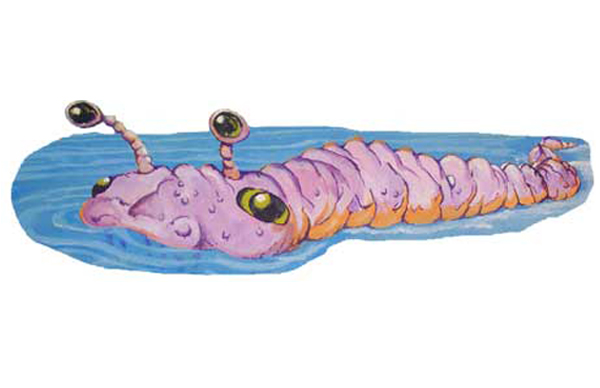 Is there a monster in Lake Cane? Some of the locals say absolutely. Many Lucky’s Lake swimmers have said they have felt it’s presence
when they swim; affectionately they have nicknamed him/her/it “Slimebo”.  Described as a large slug like creature 12-20 feet long, it usually appears at  dusk or dark. Although it’s favorite hangout is Lake Cane, it may squeeze  down through the spring and live in the aquifer. It was also  reported in the sink hole about 700 feet away from lake cane so there may be  underground connections elsewhere. Around since the early 60s its age is  unknown.

Although its mouth has been described as ranging in size from 1-3 feet, apparently it’s swimmer friendly as its presence has been
described by swimmers underneath them during pre-dawn swims.Our monster rarely joins group swims preferring the company of solo swimmers.  Occasionally Slimebo will touch you, don’t panic  he/she is just curious.

Reports are that you can hear or feel  Slimebo more easily than seeing him/her/it. An occasional splash near the  shore may be Slimebo’s eye-stalks making a quick  retreat back into the water. Although described as slow moving he/she/it has been  reported moving at very fast speeds on occasion.

Slimebo has never been seen on land  rarely comes within 10 feet of the shoreline. Mysterious bubbles  occasionally on the shore line, once thought to be due to detergents being dumped in the lake, were tested and were not pollution. Some say is part of the slime released by Slimebo.

Alligators do not like Slimebo, so swimmers take heart when Slimebo is around gators are not.

What the Lake Cane Monster is Not: