Everything you wanted to know, which happened in the 2021 Golden Mile, but were afraid to ask.

Before we jump to a round-up of the Golden Mile®, a quick update on Lucky’s Lake Swim, we are back to mass starts at 6:30 am weekdays and 7:45 am on Saturdays. The only exception is for check-in volunteers that come in early to swim, so they can check-in first-timers. You may notice that there may be other swimmers on the course, but they start at different sites, not at Lucky’s. Also, masks are no longer required at the Lake Swim; indeed, it is acceptable to wear them, as some believe it is now a fashion statement for high society; for the rest of us, feel free to burn yours at the gate entrance.

The 2021 Golden Mile® was a huge success. We raised many thousands of dollars for the Lake Cane Restoration Society, and like Scrooge McDuck in his vault, we are still tallying the totals. $1500 was raised at the memorabilia table, and $1400 was confirmed for the silent auction. So, you can be sure you will see these appear in future Golden Miles®.

To dispel some “Fake News” items. The “petting gator” from Gatorland did not get released into lake cane after the race. I can report he’s happily back with his brothers and sisters at Gatorland. If we released the gator shortly after the start, as Lucky requested, everyone’s times would have been a bit faster. Gene Augustin, who set the 90-year-old age group record with a time of 1 hour 11 minutes, would have been under one hour, Lucky said, “if he had just a bit of gator pressure.” We are checking to see if gators are considered an athletic enhancing drug, but we are still banning the use of them during the Golden Mile® competitions for the time being.  Race Results are Here

We had nineteen new age group course records set, and Carlie Rose broke her own open women’s course record with a time of 18:19.6. It was a 1-2 finish for the Rose family, with her sister Marin Rose scoring the silver in the open division. Rick Walker, winner of the gold medal in the men’s swimmer of the ages division, broke the men’s 70-74 record by over 20 minutes coming in at 22:20, and more amazingly, his post-race drug tests came back normal. The rumor that he drank 23 cups of espresso right before the start is still being investigated. You can check out all the course records here. And you can check out final results in age groups here and where you were ranked on our swimmer of the ages handicapping here.

Many thanks to Hamza Preure with www.Sportlightme.com for taking a lot of wonderful photos. I think they have images of about every competitor that participated in the race. You can check out the photos here.

So who were our gold medalists? Joshua Brown Open Men, Carlie Rose Open Women, Rick Walker-Swimmer of the Ages Men, and Cathy Shonkweiler Swimmer of the ages woman.

We also had a tie for second place in the men’s open division, with Jacob Hamlin and Nathaniel Chon having the same time. Those silver medals are 16 oz of pure silver, and we don’t have extras to give out for ties. Instead of doing the couch potato method of flipping a coin to decide who was the winner, we had a swim off, which went from the start to around the first buoy and back. It was a close race, but Hamlin ended up taking home the silver.

Lucky thanks to all the volunteers who made this race possible, and there were over 50, you have made this race into one of the most memorable in the open water swim community. Lucky would also like to give special thanks to the race director Jillian Wilkins, Jay Madigan, and Shawn Berg, who spent countless hours working to make this delightful event. In contrast, Lucky spent his days eating bonbons and sipping mint juleps during binge-watching sessions of old Perry Mason reruns.

Golden Mile for 2022 is Saturday, May 28th, so red letter that day on your calendars. 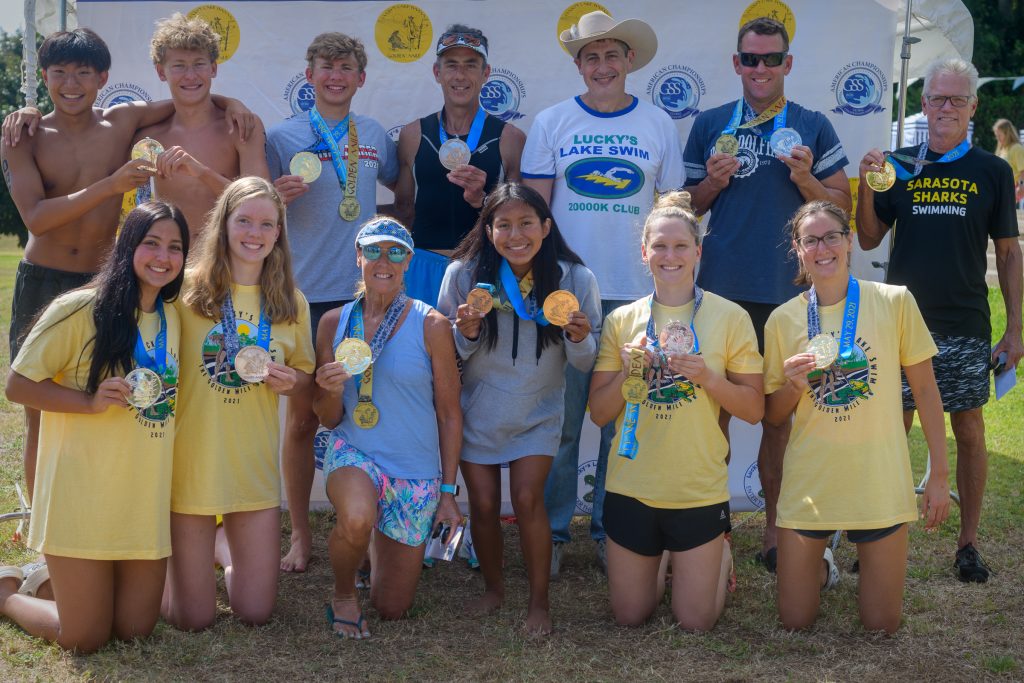 Golden Mile open and Swimmer of the Ages winners. 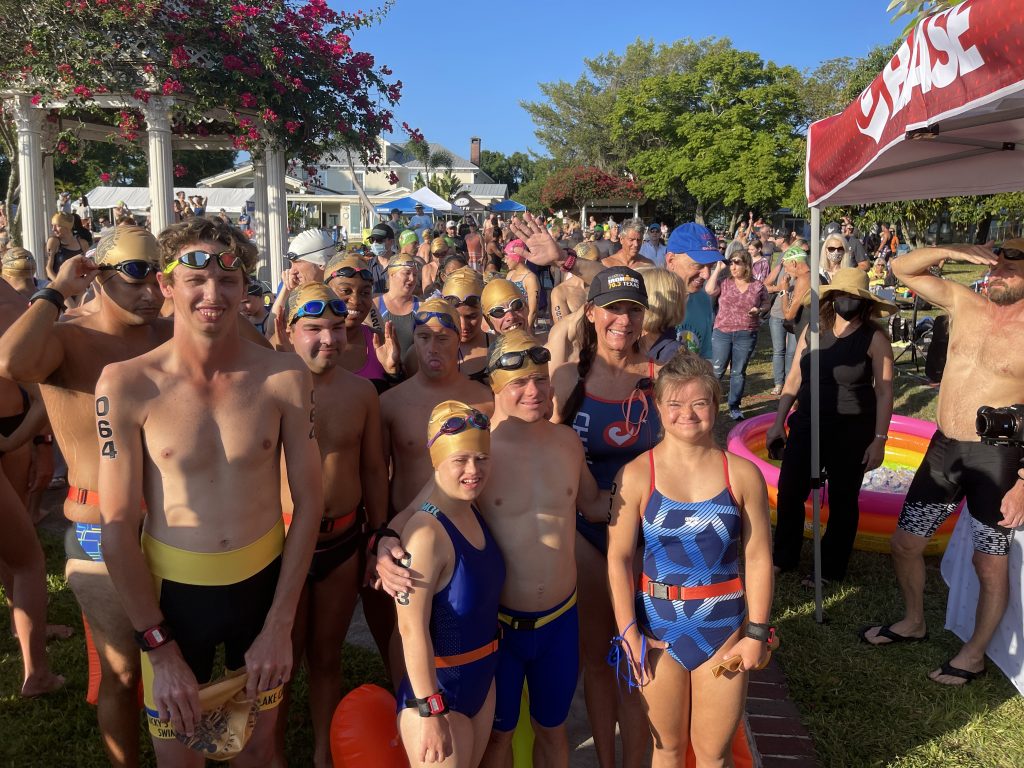 We had nine Special Olympians join us for the Golden Mile® 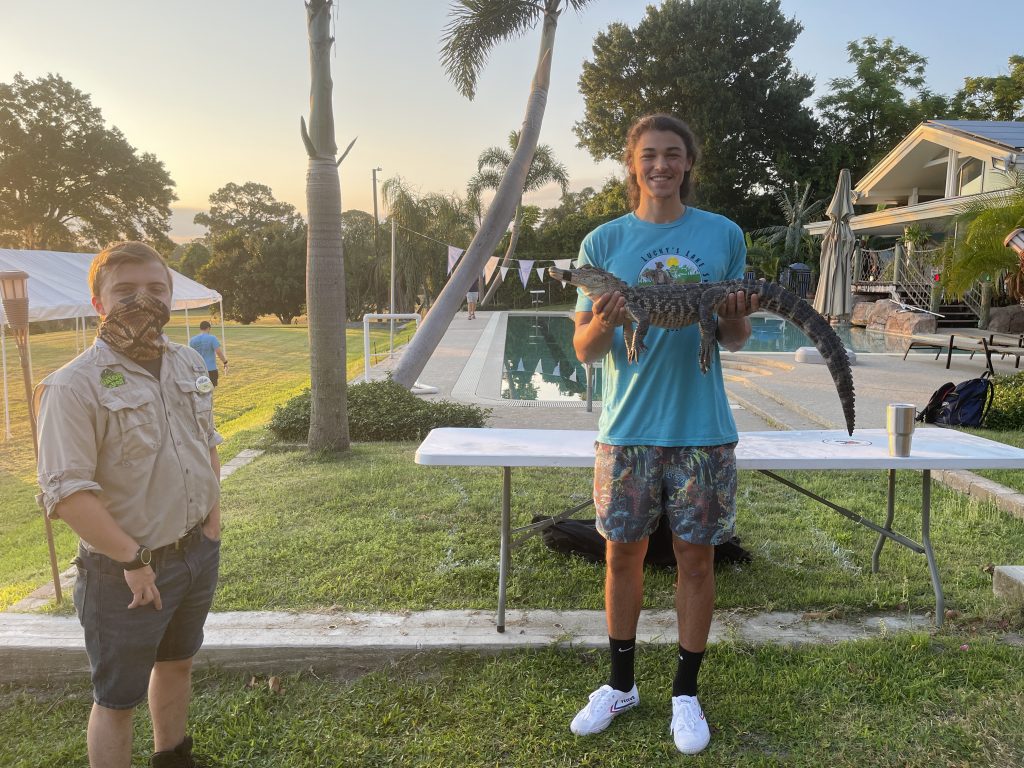 The Gator from Gatorland was a hit and will be entering the race next year once he’s a bit bigger.