Yes, we are still swimming. Last Saturday, we had over 50 swimmers, not too shabby considering the rest of the country was frozen over. The lake temperature has been hanging out in the high to mid-60s, which is black sausage suit weather for most of us, except for the real men and women, and, of course, a few crazies are thrown in the mix. We are still working out some of the bugs on our temperature live gauge, which can be viewed on our website by clicking on the link near the top of the page. At the time of this post, it was not working, but it is going in and out, so you might get lucky if you check. Ultimately we will have a live feed to the web page. We have to solve the problem of Russian hackers, and we are good to go. 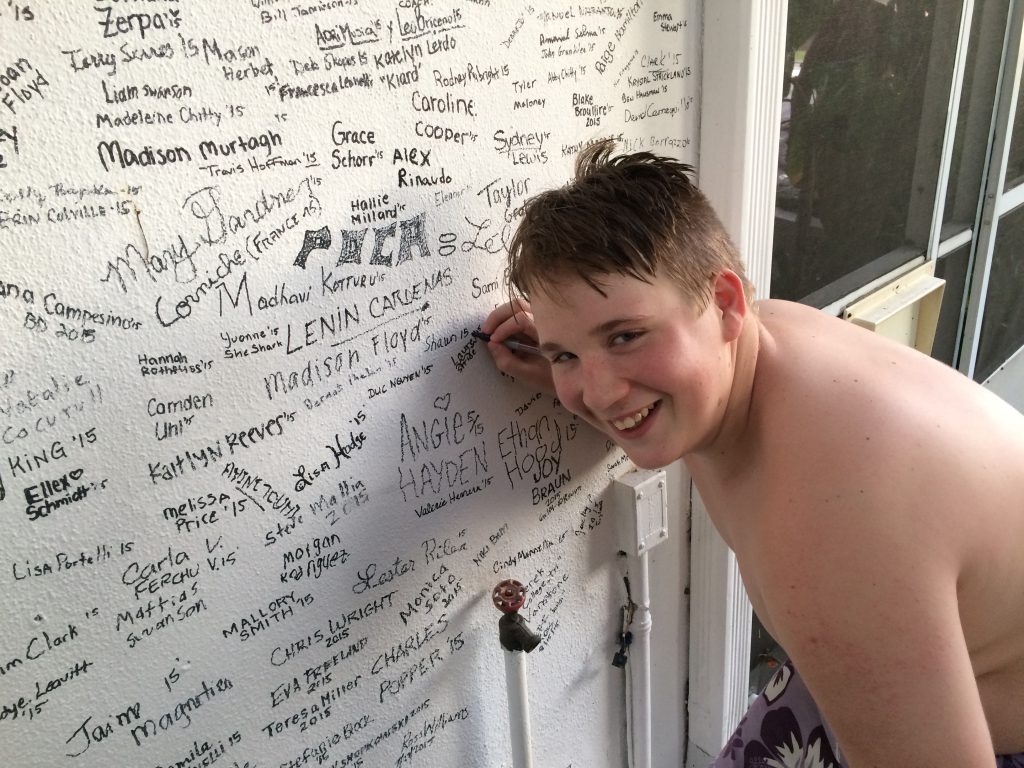 Shawn Berg was signing Wall of fame age 14, summer 2015. Some of you may be aware of one of our Lake Swimmer’s past life challenges, and others may not be aware, but Shawn Berg, who is a lake swimmer and a member of the YMCA’s underwater hockey team has overcome some serious obstacles in his young life. Unbeknownst to the swimming and underwater hockey community, Shawn was homeless for the last eight years. His family lived in hotel rooms if they had the money, and if not, he slept on the street. His parent’s only source of income was begging on the I-drive area, which Shawn was required to do as well. Most of the money obtained went to drugs and cigarettes for the parents, and if any was left, hotel room and food for Shawn and his younger siblings. Shawn was forced by a lack of money on several occasions to eat out of dumpsters along I-drive, and he has not attended school since the 4th grade. Amazingly this was going on while Shawn was playing underwater hockey, doing Lucky’s Lake Swims, and volunteering for many of the Lucky’s Lake Swim events. The good news is that Shawn has removed himself from the toxic environment he was in, and now works, has an apartment, and is studying for his GED. His goal is to go to the fireman school at Valencia. The Lake Cane Restoration Society is helping Shawn with some of the expenses associated with getting his GED. (he has already completed two of the four testing requirements and based on practice exams is right on track for passing the last two shortly) LCRS has also contracted with Shawn to do the setup for our events. The Rosen YMCA and the Lake Swim has had a significant impact on Shawn’s life. The YMCA has recently done a short video on how the Y served as an exit ramp from a road of destitution. Please watch the video below. 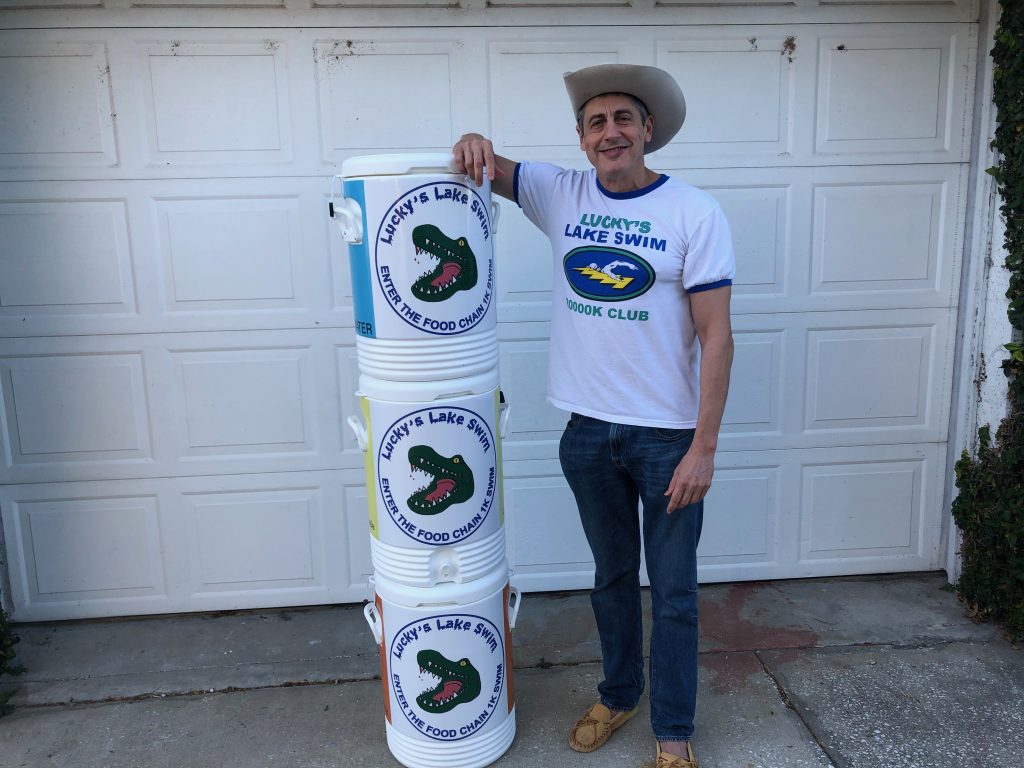 Got fluids? Yup, we do now. No more borrowing reclaimed water jugs from the sanitation department for our events. If you miss the flavor of the previous reclaimed water jugs, you can go out to the road and drink straight from the vineland sprinkler system.  The rest of use will be partaking our liquid nourishments from these super cool water jugs. 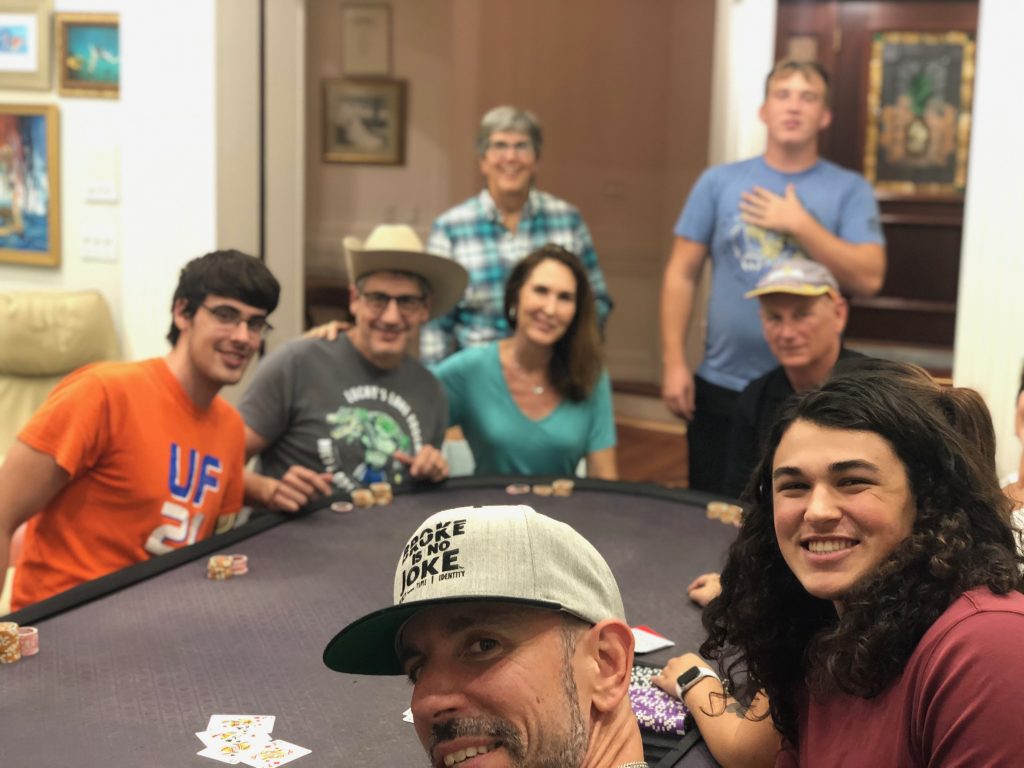 Some of the folks at the final table at the Lake Cane Restoration Society 1st annual poker tournament. The tournament was a grand success with everyone having fun and planning on returning for the next one.  Over $600 was raised after expenses. Sky (The Ringer) won the 1st prize of $300 Maximus Meisenheimer took second $200 (he was charged with hiding cards in his hair, but three people went into his scalp to investigate, and none of them returned.  (We have already sold the film rights to this story).  Lucky squeezed in third for a prize of $100 and was heard saying he was going to the Doll House. Shortly thereafter, Lucky suffered a small concussion from a flying object, and a broken lamp was found at the scene. Lucky, then indisposed, changed his travel plans, and Jacquie reportedly donated his winnings back to the Lake Cane Restoration Society. 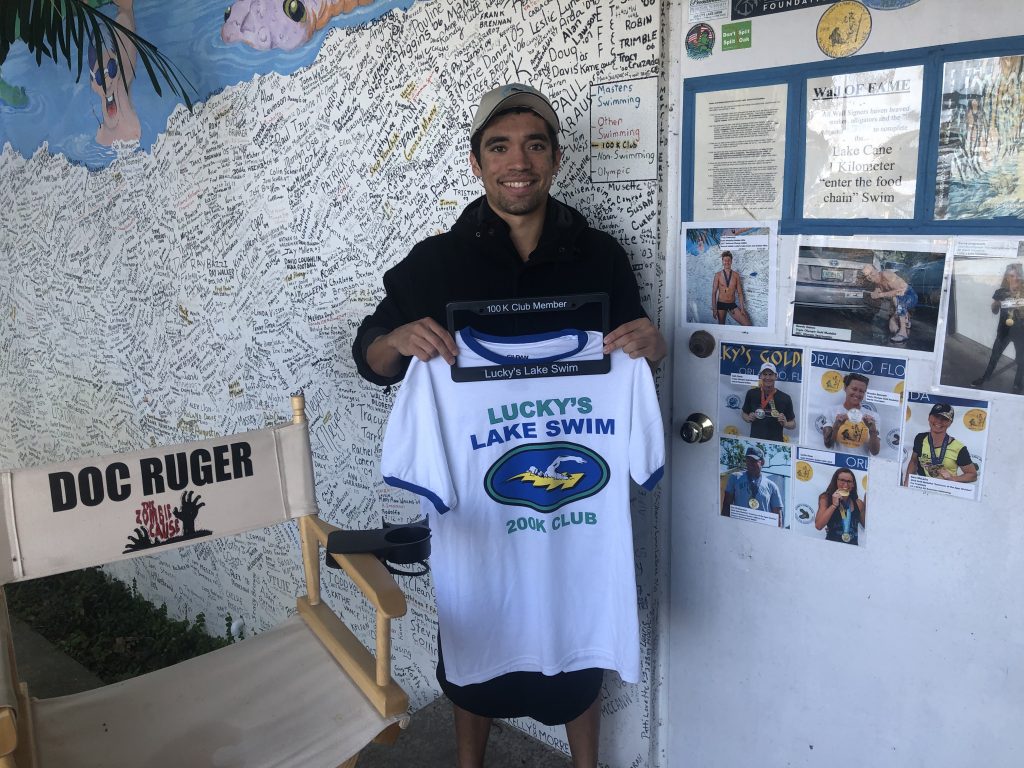 Luis waited to collect all of his swag at once 100K club, 200K club. He’s so fast he swam by his milestones and didn’t even realize it.