The water is a toasty warm 64 degrees (which is indeed warm if you live in San Fran), but since we live in the sunshine state, this sucks.  We still have a half-dozen folks braving the cold and dark weekday swims, and most of them are not sans wetsuits. Lucky has squirreled himself away in his Swimex wrapped in a blanket and sucking his thumb. Maybe some Saturday he will quit being such a Nancy-Boy and join the Viking swimmers. The bottom line is we are still swimming every day, and if you want, we can still squeeze in a slot for you to swim.

Lake Cane Restoration Society Board Meeting Thursday, Feb 7th. at 6:30 pm to be held at the Dr. Phillips YMCA. Jay Madigan (aka supreme leader) says it’s an important one. He suggests that if you tend to forget board meetings, then you should hire a tattoo artist to put future dates on your left forearm. Lucky has also volunteered to work the ink, but he only knows how to do Gucci Gucci girls and anchors.

Some food for thought.  The water temp at the Rosen YMCA Aquatic Center in the 80s.  Most of the players on the team are Lucky’s Lake Swimmers.  Isn’t it about time you tried it out for yourself.  We can supply you the gear.  Just show up Mon-Wed-Fri 7:30 pm 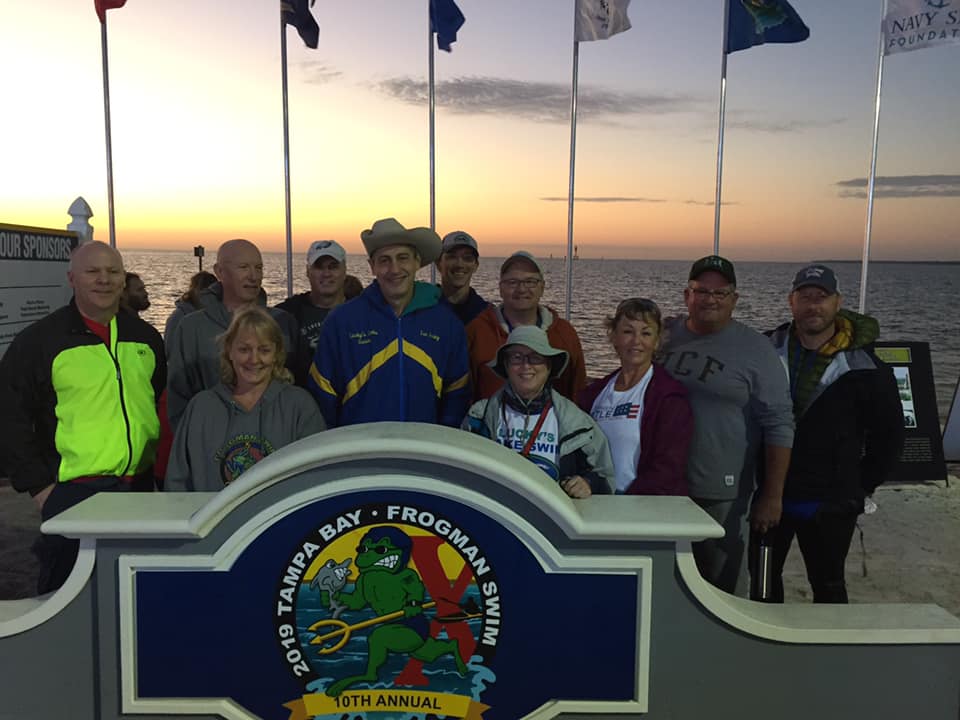 Several Lucky’s Lake Swimmers that participated in, or were volunteers at the Tampa Bay Frogman Swim for the Navy Seal Foundation. Not everyone is shown because there were several that did not want to have their picture taken with Heff. 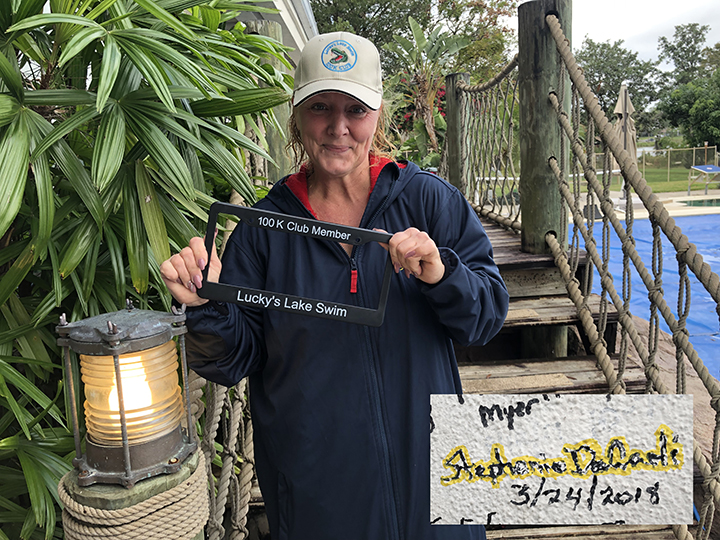 Please notice Stephenie has a halo of yellow around her name. This halo protects you from all bad things when swimming Lake Cane, we think, so far so good. Also notice the 100K club license plate holder. If you are in the 100K club make sure you come by and we will give you one (after you swim). 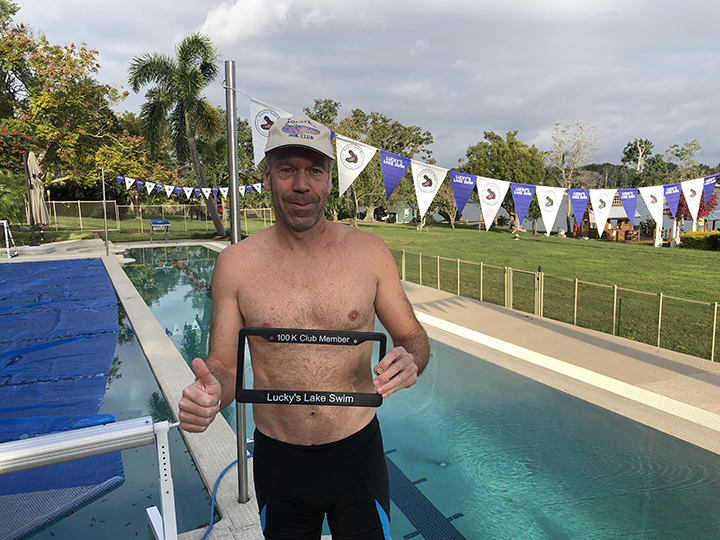 Froderic does not have a halo around his name because he can’t find it. Shame, shame Froderic. I hope something doesn’t eat you in the lake. The halo is protective. Better find that name. 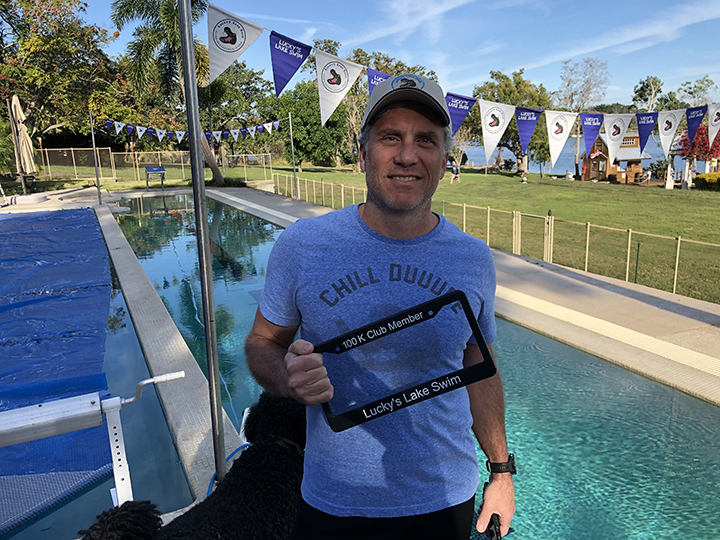 OMG Ernie doesn’t have a halo of yellow either. WHAT THE HECK! To be in the 100K club and not have a halo is quite the burden. If you don’t believe me just ask Jay Madigan. Maybe you guys should form a name finding team. 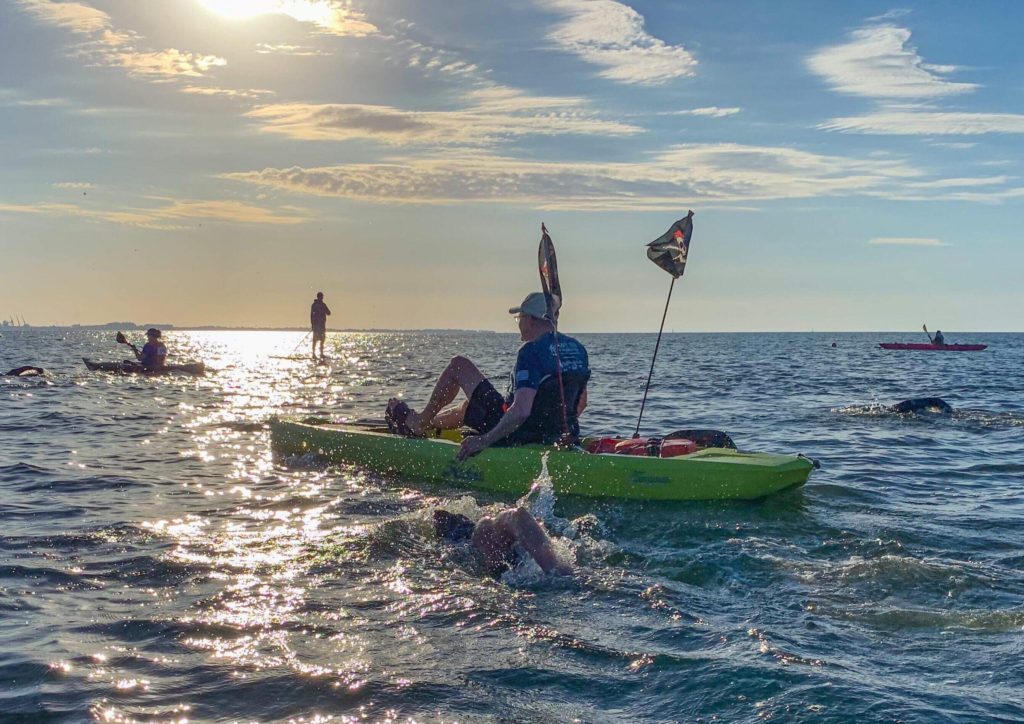 This person does have a halo around his name and did not get eaten by a shark during this swim, which scientifically proves that the halo is protective and the earth is flat. The kayaker is Glenn Baker (Mr Awesome). Thanks to Glenn this is the first time Lucky has swam in a straight line in 20 years. 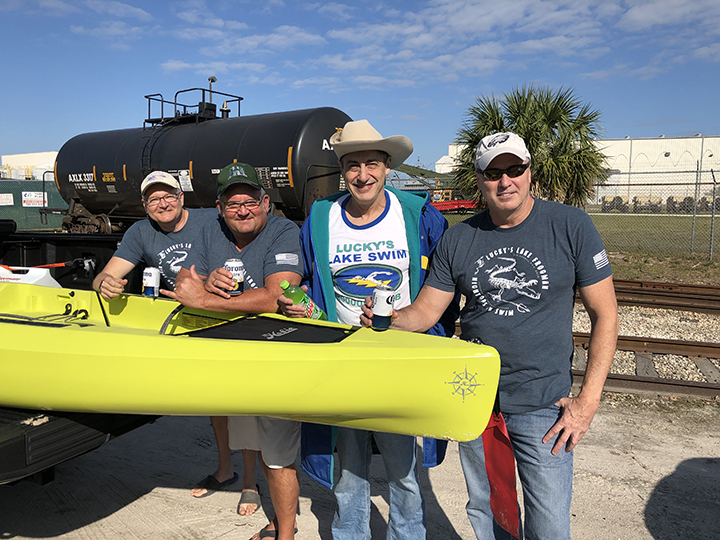 Lucky and the Swim Guzzlers after the Frogman swim in Tampa. As all great competitors know a proper warmup is essential. Lucky learned that before you walk across the street to the bar you need a street crossing beer . . . sometimes two. Apparently sugar free, caffeine free Mt. Dew is frowned upon as a bar warmup, and as a pre and post race beverage. Lucky is still being educated. 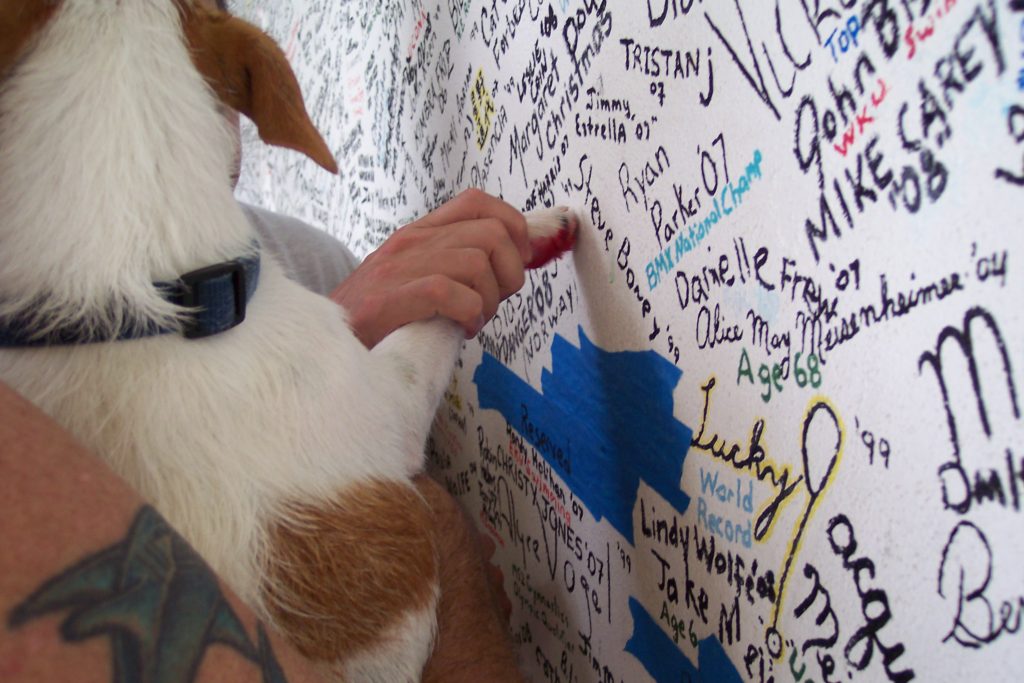 A Lucky’s Lake Swim historic photo. Lucky found a camera, about eight years old, with the old SD card still in it, just like the Blair Witch project. This new found photo is of Digger signing the wall of fame at his 100th crossing. 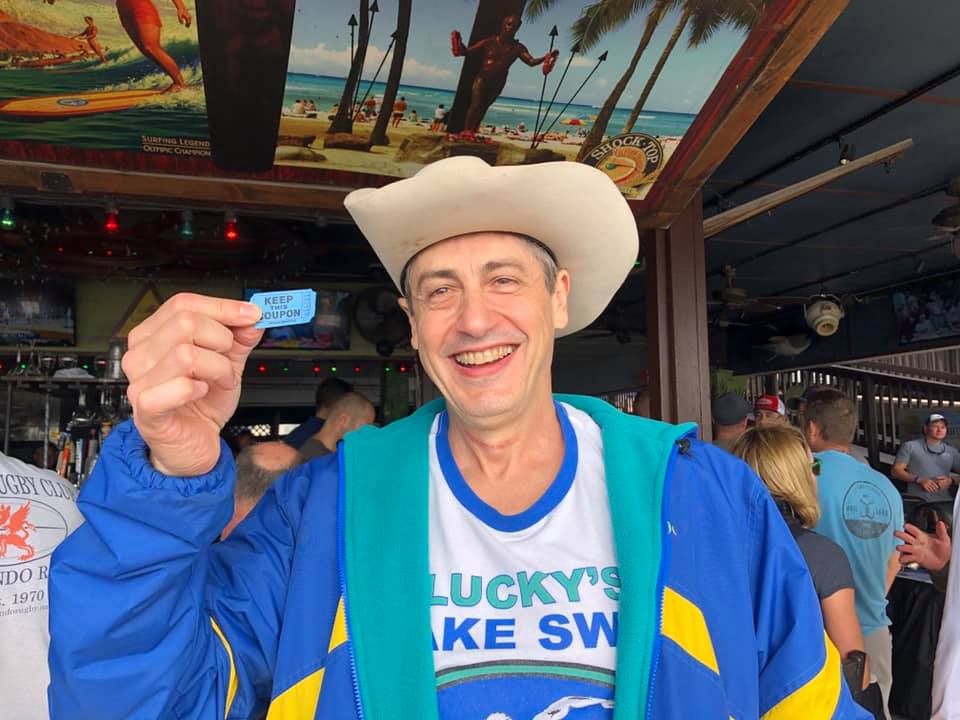 To add absolute proof that the halo of yellow on the wall of fame is good luck. Lucky won the 50/50 raffle ($1000) at the frogman post race party. This went much better for him than our frogman swim where they sold him tickets but forgot to separate the entry from duplicate. The only way Lucky could convince Heff that the money should not be invested in a microbrewery was to donate it to the navy seal foundation. 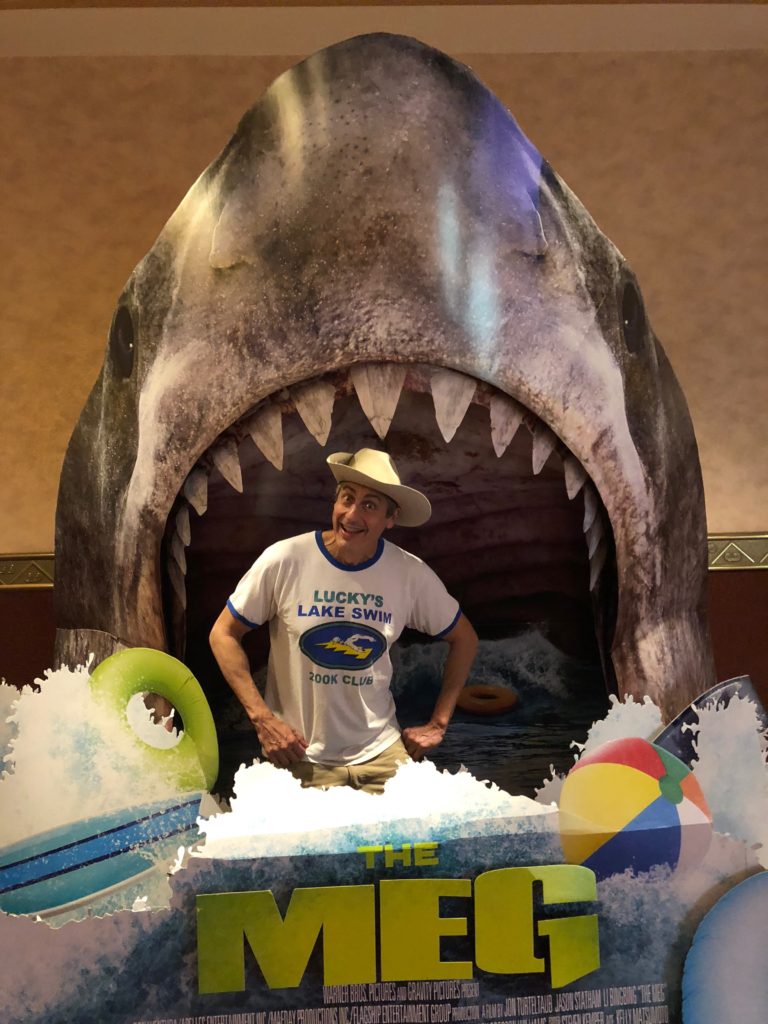 So, folks are already asking what movie might be shown at the midnight swim this year. Lucky says he is clueless. “I am waiting for a movie to jump out and and grab me, I am always on the lookout. I am known for being obsessive about observational awareness of my surroundings,  so I doubt whatever movie it ends up being, it won’t surprise me. Right now I am thinking along the lines of Finding Dory.”